This Review originally ran on Keith Silva's blog:
Interested in Sophisticated Fun?
IT IS WRITTEN BY KEITH SILVA.
I run it here because it is awesome.
After reading this review, you will understand what I mean
and then go read more of Silva's Blog 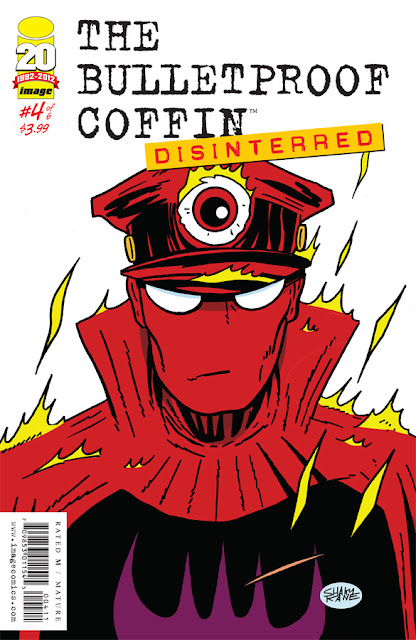 Do you believe in the orderliness of events or is your day only ordinary? Have you ever thought that sequential storytelling shackles the intimacy of creativity? What did you make of The Bulletproof Coffin: Disinterred #4? Did you find the warmth of the arts and crafts room with its redolence of paste comforting that summer you went to the camp by the lake, the one run by the Catholics? When you see a gimmick or gimcrack, do you look past it or do you appreciate its novelty? Can you spot allusions to Lovecraft? How do primary colors make you feel?

How was the movie The Avengers? Did you ever wear X-Ray specs out in public? What sort of grade would you give David Hine on a scale of one to ten where ten is a genius and one is a quack? Who is Steve Newman, really? Would you agree with this linear equation: Shaky Kane's style is to Marvel as Roy Lichtenstein is to DC? Why 84 panels? Did you cut it up? When you see a humanoid fly, which comes to mind: Kafka, Price, or Cronenberg? Are you familiar with Padgett Powell's The Interrogative Mood? Has this turned tiresome?

Did you recognize the King on the throne? What's the point of all this? If Hine asked you to stand him a pint, would you? Are 'the Beats' still relevant today or merely musty curios? Are you certain you could not give your mother Bulletproof Coffin: Disinterred #4 to read? Is it the drugs, the alcohol or the Oreo cookies? If asked to describe Kane's art, are you inclined to choose the word reductive or grotesque? Would you buy The Latex Mask if it were next to an all-ages comic book? Did you know George Adamski was a real person? 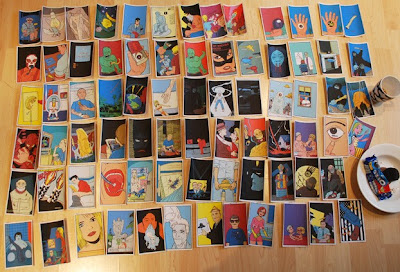 Are red aliens less or more sinister than green aliens? Does anatomical correctness factor into your judgment when it comes to the illustration of a penis? Why aren't more reviews written in the second-person? Have you ever used the phrase, 'I'll read it in trade' as a crutch? Has the thought ever occurred to you how fun it would be to own a functional ray-gun? If Hine wrote poetry do you think it would read as opaque? Did you notice how often Kane draws circles? If you could call on a 'Dream Detective,' what would you say? What's your story?


ONCE AGAIN -- THIS REVIEW
WAS WRITTEN BY KEITH SILVA (not me)
AND RAN ON HIS AMAZING BLOG,
INTERESTED IN SOPHISTICATED FUN.