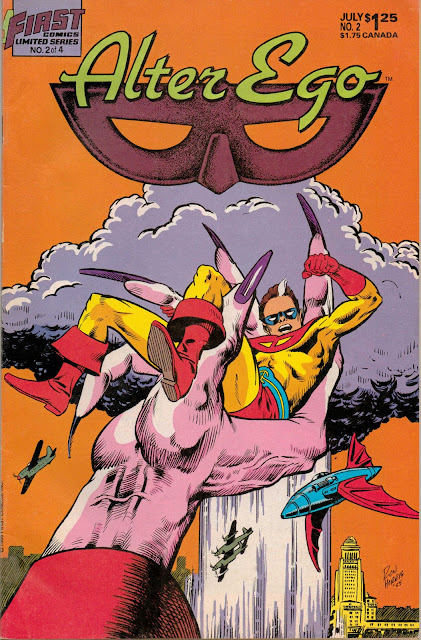 HOW CAN I SIT HERE EATING THIS CAFETERIA CRAP – WHEN I THINK I MUST BE GOING CRAZY!?

The summer of 1986, July specifically, seems to have been a time of torpidity. I mean really, what happened then? Sure, the reopened the Statue of Liberty after spending all that time making it all safe and shiny and shit, but that’s about it.

Some of the biggest releases in music then were Music from the Edge of Heaven from Wham! and Flaunt It by Sigue Sigue Sputnik.

Into this thick miasma of lifelessness, First Comics snuck a weird little gem into comic shops in the form of Alter Ego #2. This event should be noted because this comic is either a brilliant subversive missive promulgating a Gay Rights manifesto, a work of metafiction akin to Morrison’s run on Animal Man, or an incoherent slop-fest of tumid mouth breathing inanity. Maybe by the end of this week’s column I will finally decide which it is, and thereby be the better man for the journey. 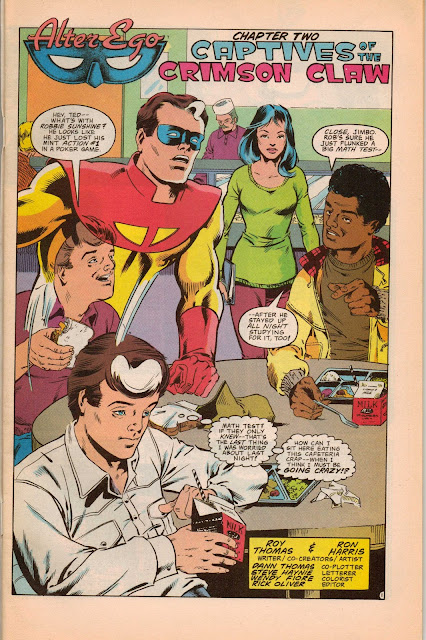 The comic opens with this splash page. This is supposed to be a high school cafeteria, although all of characters look like they are at least in their late 20’s. Two guys are wondering why their friend, Robbie, is looking so distracted. They are assuming it has something to do with a recent math test, but Robbie’s thought balloons reveal that he has more on his mind than school, and the costumed figure emanating from his head is supposed to be a visual manifestation of his concerns (but it is ludicrous and distracting and stupid and an indication of the level of artistic achievement that this comic embraces – whatever).

Robbie is concerned that he is “Going Crazy.”

For the next two pages, the comic provides some much needed context by recapping the events of issue #1. In a nutshell, Robbie was given a bunch of Golden-Age comics by Cap, the one-eyed owner of Cap’s Comics. Included in these comics was an old issue of Alter Ego (but not the current comic). Cap’s Comics blows up right after Robbie leaves, Robbie gets attacked by characters out of the comic books (Rockjaw, Uriah Heap, and the Emerald Sorceress), Cap saves him and reveals himself to be another comic book hero called Captain Combat. Captain Combat dies in combat and turns into bits of paper. A mask falls out of the Alter Ego comic book which, when Robbie puts it on, turns him into Alter Ego himself and forces him to enter some other world inhabited by “cartoony versions of Hitler, Mussolini, and Tojo” (not making this up, people). Robbie/Alter Ego frees a bunch of Golden-Age comic book heroes (the “Limbo Legion”) and they discover that the Axis leaders were actually robots controlled by a bad guy named The Crimson Claw.

Whew. As ridiculous as that was (or absolutely brilliant, still working on this), at least we have context. Thank you Roy Thomas and Ron Harris for that, at least.

Needless to say, all of these events have our poor teenaged (?) Robbie all muddled and distracted. Distracted to the point where he even is able to put aside his hormonal longings for Jinnie, the object of his post-pubescent affections.

Well, at least they TALK like teenagers (I guess).

Robbie spends the next couple of pages moping and mewling about his Alter Ego problem. It is here that I begin to suspect that there is more going on in this comic than what meets the eye. Here is a teenage boy worried about and struggling with his “Alter Ego.” He has lost interest in his lady friend and is obsessing about the reality of who he is.

He ends up going to his locker. Inside his locker he finds “the mask”

located behind a closed, locked door, which, upon Jinnie’s arrival, he quickly slams shut and starts making excuses as to why he won’t open it in front of her.

You see where I am going with this?

Later, in Gym Class, after changing with the rest of the boys, “the mask” makes it reappearance. 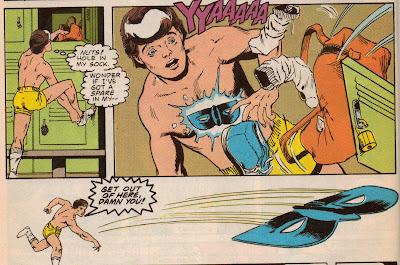 Robbie denies its existence and tries to throw it away from himself, but “the mask” follows him around. When he looks into the mirror, Robbie sees a reflection of himself, only dressed in the gaudy form fitting costume of Alter Ego.

Finally, Robbie embraces “the mask” and hides his visage behind it.

This act, the acceptance of “the mask,” transforms Robbie into the titular hero, Alter Ego, and as he does so he is pressed through a pink wall.

Now, this comic could just be complete crap – ridiculous puerile crap – but there seems to be this subtext that is occurring that I just can’t seem to intellectually shake. Are we looking at a piece of metafiction which is commenting on the conventions of the genre itself, or are we looking at a complex piece of metaphorical writing that is addressing a young man’s struggle with his newly realized homosexuality? Does putting on “the mask” allow Robbie to become who he really is (which turns the convention on its head as we normally call this process “removing the mask”)? If so, then the Robbie who is now Alter Ego should be able to be more fully self-actuallized.

After passing through the pink (make your own joke here – my gift to you). Robbie/Alter Ego joins the Limbo Legion outside of The Crimson Claw’s Mountain Fortress where he assumes a leadership role, declaring that he’s “the only one around here with Super-Powers.”

The Legion informs Robbie/Alter Ego that The Crimson Claw has ramped up the war effort and has gotten his hands on some incredible weapons. Robbie/Alter Ego tells the Limbo Legion to give him an hour while he scouts the Mountain Fortress, sees what’s up, and find a character named The Flying Deutschman who entered the Fortress earlier.

Robbie/Alter Ego flies off to the Fortress, a giant pink mountain with a huge mouth shaped hole in it through which he must climb. 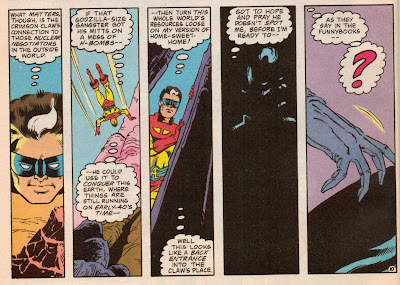 Into the pink maw, Robbie/Alter Ego goes. Inside he stumbles around in the dark. Suddenly he touches something, something wet and warm… 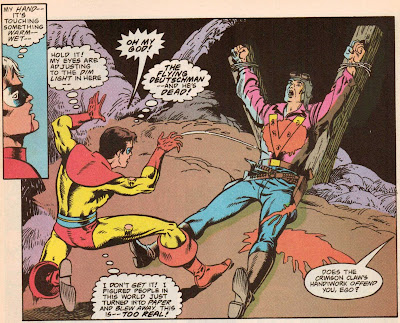 OK. This scene pretty much seals the deal for me. First, look how the Deutschman is splayed out. Second, look at the “movement lines” Ron Harris has penciled – from where is Alter Ego pulling back his hand? Third, in the small insert box on the panel, why is Alter Ego drooling? Finally, why does Alter Ego say, “This is – TOO REAL!”?

Let’s assume now that there is little left to dissuade me that this is not a comic about a young man dealing with the realization of his own sexual orientation. Let’s embrace this fact and continue through with this clarity of purpose.

1986 was a pivotal time for the Gay Rights movement and homosexuality was really becoming a matter of public discourse due to the ravages of the AIDS epidemic. The time was ripe for someone like Alter Ego and his struggles with the social and cultural ramifications of his understanding of his homosexuality given the tenor of the times.

Back in the comic, the Emerald Sorceress shows up and tries to team-up with Alter Ego. He doesn’t trust her one bit, though (metaphorically appropriate). It is then that The Flying Deutschman’s real killer reveals himself: LOCKJAW! 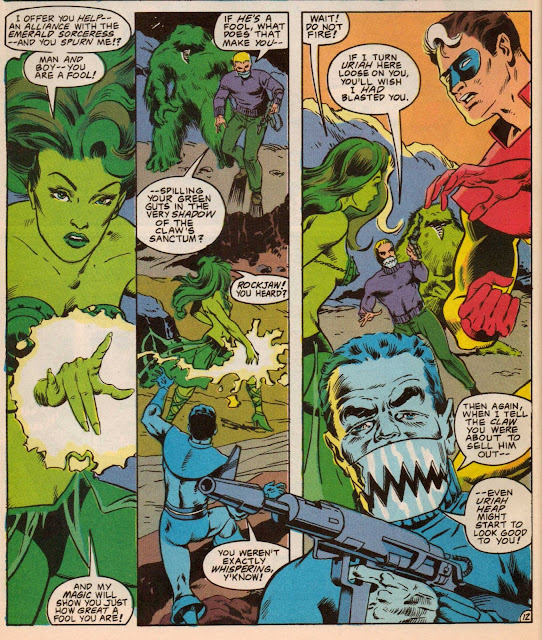 Lockjaw carries a gun and has razor sharp teeth.

Symbolism people, we are talking symbolism.

Lockjaw proceeds to shoot his gun at Alter Ego over and over again. Alter Ego is exhausted by the punishment, but, still in conflict with his own acceptance, lashes out violently. 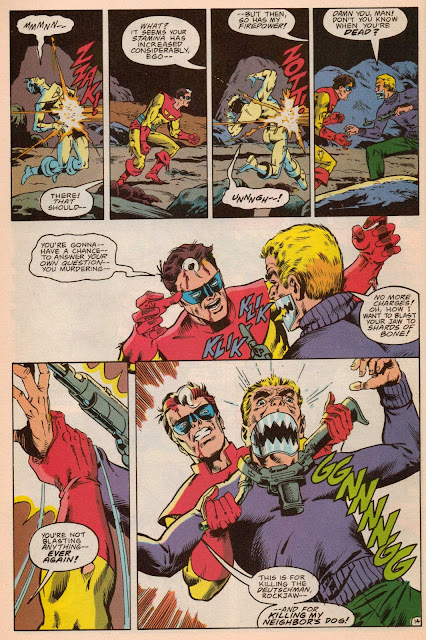 He gets behind Lockjaw and strangles him with his own gun.

I just rechecked the credits for this book. Nope, David Lynch was not involved in any way.

The brutal killing of Lockjaw spurs another villain, Uriah Heap, “the Human Swamp,” to snap into action. 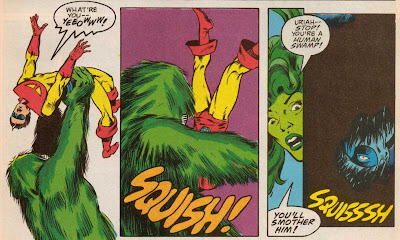 You see what I’m saying here? Tell me my interpretation is wrong!

Just in case you missed it, Ron Harris provides you with another panel.

Alter Ego is being suffocated.

The Emerald Sorceress saves Alter Ego by turning Uriah Heap into stone. Alter Ego thanks her, but reminds her that he has “a date with the Crimson Claw!”

Alter Ego climbs up through another dark tunnel next and gets his big reveal. 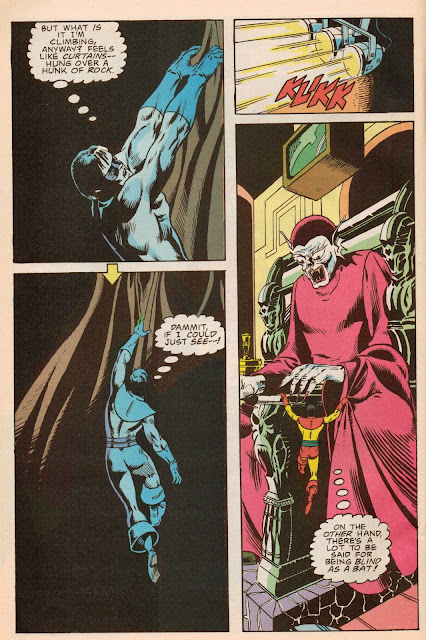 It’s the Crimson Claw! The Crimson Claw is a hermaphroditic, fish-eared, skull-faced, sharp-toothed, long-nailed giant dressed in pink religious robes. Is he/she supposed to represent all the fears that Robbie has about the embrace of his true sexuality, or is The Crimson Claw a symbolic manifestation of the Christian Right and their relentless dehumanizing anti-gay vituperation?

Whatever The Crimson Claw is supposed to represent, he/she is big and mean and powerful. 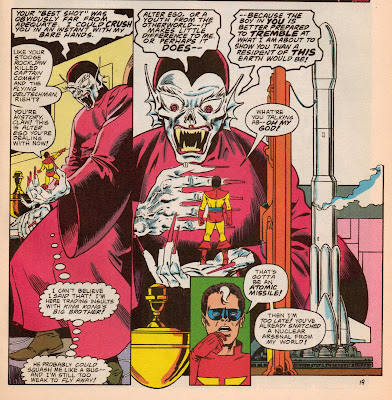 The Crimson Claw says, “Because the boy in YOU is better prepared to TREMBLE at what I am about to show you” as he/she reveals his/her missile, his/her large, taut missile.

In this moment my decoding of The Crimson Claw as a symbol lurches violently towards it being a representation of Robbie’s psychological battle with his newly discovered homosexuality. The Crimson Claw is but a projection of Robbie’s own tortured struggle to accept who he is in the face of a society that has told him over and over again that his true self is dirty and evil and wrong.

The human psyche is a powerful thing, though, and the next scene has The Crimson Claw trying to convince Alter Ego that they are really natural allies and they should be working together. Alter Ego’s ego doesn’t buy this, so The Crimson Claw begins to squeeze.

OK, now I dare you to argue with my thesis about this comic.

Try as he may to fight it, Alter Ego is no match for The Crimson Claw and he has to watch in horror as the missile is launched. 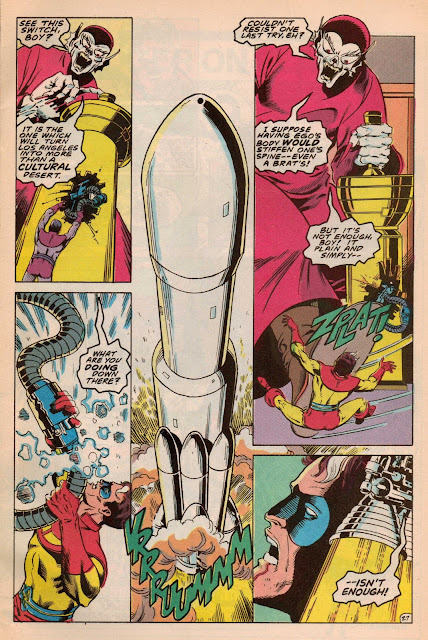 The page speaks for itself.

And thus the comic ends.

Alter Ego #2 was a brave endeavor, a bold statement of compassion and empathy for the struggles of the gay community, and it was released during a time in this country where the debate on the subject was often being carried out by froth-mouthed fascist zealots. I applaud First Comics and Roy Thomas and Ron Harris for their fortitude and openness in addressing such a hot-button issue in 1986.

I’m almost inclined to track down the other three issues in the Alter Ego miniseries in order to see how the creators resolve Robbie’s dualistic strife. If anyone reading this has read the whole series, please drop me a line and let me know if it is worth it.

So, in answer to the question, “Was Alter Ego #2 worth the 50 cents?” The answer is obvious. Roy Thomas and Ron Harris have crafted a metaphorical masterpiece that should be introduced to more people in the name of humanizing the struggle our homosexual friends and relatives and acquaintances have had to go through as they try to be true to themselves in a society that still condemns them. The comic should be used by proponents of gay marriage, prosecutors of hate crimes, and counselors who deal with the issues specific to the LGBT community.

Alter Ego #2 is a teaching tool for tolerance.

At least I think it is.

Man, I hope that I’m right in my interpretation of this book. Otherwise, this comic was really a piece of shit and doesn’t even deserve to be in a bargain bin.