I have decided that the only way I can ground myself in the midst of writing Tech Plans, formulating timelines for fund drives, having panic attacks over the school's budget woes, and my own mishegaas (don't even go there) is to fill my head with feedback -- lots and lots of guitar feedback. Now nobody will ever do it like Lou Reed on "Metal Machine Music", but let's take a look at a couple of brothers from East Kilbride, Scotland, Jim and William Reid, who in 1984 threw poop all over the music industry with a tremondous force fed by feedback. They did this by forming the band: The Jesus and Mary Chain. 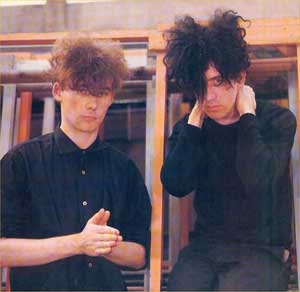 (God, if only I still had enough hair to do that)

These guys, when they first started, would play like 10 minute sets consisting entirely of this massive ear-bleeding screaming and pooping wall of feedback. These shows, of course, often ended up with the audience rioting -- after all, what else is there to do after being fully assualted for 10 minutes.

The band's first record release was titled Psychocandy . Wow, who knew you could bend screeching feedback distortion smash your face eyebleeding noise into a beautiful melodic love song? The Jesus and Mary Chain knew they could when they released the single, "Just Like Honey". I'll never forget the moment I first heard this one in my suburban Dallas middle-class Jewish bedroom. If I had thought about it, I probably would have fallen to the floor a quivering mess. But I wasn't thinking about that. I was thinking about the noise. And of course, I had to think about the hair:

The brothers Reid calmed it down some after the debut album and released some more toned down ideas and sounds. Then came "Reverence" which spewed it again all over the faces of anyone who would listen -- spit and bile and, of course, distortion.


Almost makes you want to die, too -- doesn't it? Anyway, toward the end of the band's inital run (they "broke up" in 1999) things got discordant (as you could imagine), but they were able to produce, after "Just like Honey", my favorite Jesus and Mary Chain song: "Hate Rock and Roll". In this song, the Reid brothers demonstrate that they have fully mastered the noise, the feedback, the ear-bleeding, so that (especially at the end of the song) you can't help but pound on the steering wheel if your driving, smack the desk if you are working, or break a dish if you are cleaning. Listen to it and judge for yourself:

Turn off the TV. Listen to the noise.