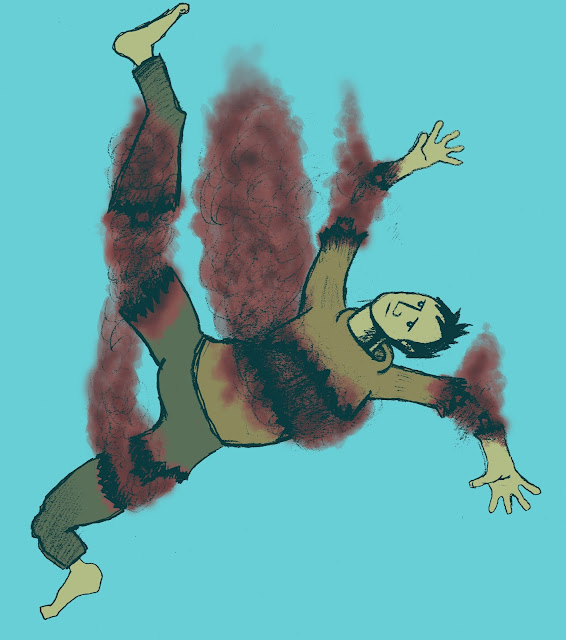 The Spanish anthology zine Argh! was a riotous mix of gross-out sex and gory humor and hallucinogenic visual trips. I first came across Jorge Parras’ work after picking up a copy of the small press publication at Barcelona’s excellent Fatbottom store. Parras is based in the Catalan capital, where he produces a variety of comix strips, illustrations for articles, loop animations, and flash games.

Knowing he was one of the publishers of Argh!, and that work of his has been featured in the likes Vice, [adult swim] and national Spanish daily El País, I wanted to find out more about his background and influences in order to gain some insights into the underground Spanish scene. Below is a transcript of a back-and-forth we’ve had via e-mail over the past few weeks on his influences and his work.A big thanks to Isabel Palomar for translating answers.
Nicholas Burman: Who were you working with on Argh!? Was that the first comics project you'd been involved in, and how did you curate the content for the magazine?


Jorge Parras: I was one publisher of Argh!, alongside my friend Félix Díaz, from 2006. A few years before, he was publishing another zine with Alberto Vázquez called Fanzine Enfermo, for which I was a contributor. That was the beginning of my career as a comic author.

At the beginning of Argh! we did some open calls for contributions, but we realized that we were receiving a lot of comics that we felt we had to refuse, so we started to write directly to authors we were interested in. Our preferred content was a mix between gore, violence, sex, and beautiful things. Anyway, a lot of people wrote to us during those years, and some of them become contributors. We were not interested in well-knowns authors, we tried to offer to the reader quality stuff that could not be found in other publications. 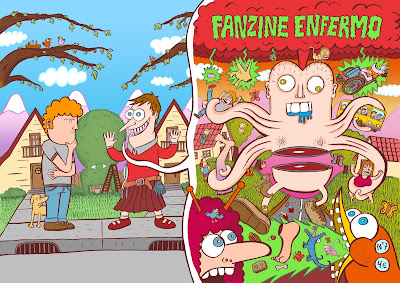 NB: What was your background in cartooning, do you have an art school background or are you self-taught?

JP: I have been drawing since I was a child, but I never went to art school. I tried to register once but there were no places, so I ended up studying photography. I focussed on comics once I had finished that degree...

NB: I'm curious to know the cartoonists or comics that you and Felix were reading which inspired you to become active in comics.

JP: In 2005, we used to order comics together in order to save some money on shipping costs. We used to order stuff from Bodega Distribution, USS Catastrophe, or directly from authors. We we got material by Dan Zettwoch, Marc Bell, Lili Carre, Tom Gauld, Chris Cilla, Eamon Espey, Jordan Crane, Eleanor Davis, James Kochalka, Ted May, and Onsmith. Their zines inspired us to start Argh! 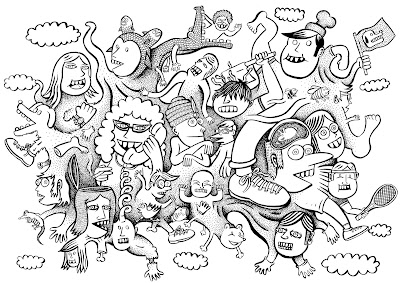 NB: I'm interested in the Spanish comics scene as it was and currently is...

JP: I guess there was not a zine/comic scene like there is today. Of course, there were people doing things, but there was not a connection between them. In their style, zines were just emulating magazines, and the authors were using their zines as a way to jump into magazine work.

An economic crisis hit in 2006, and the comics and magazine industry started to  collapse, and so authors didn’t have a place to publish their work, or to get well paid if they did. After that, it didn’t make sense for authors to publish in a magazine for no money, or merely for "promotion", when they could self-publish. There weren’t self-publishing festivals like there are today. Inspired by Portugal’s Feira Laica festival, Martín López Lam started Tenderete in Valencia in 2009, and some years later, inspired by Tenderete, there appeared other festivals, such as Gutter Fest, Graf, etc.

NB: You're a big fan of sex-orientated and gory humor, and your work also features plenty of metamorphoses and personified animals. Are you trying to shock readers, make them laugh, make them uncomfortable, or invoke some other responses? What are your inspirations behind the creatures and figures you include, why is it that you draw these things, and in this particular way?
JP: My intention when drawing is usually to make people laugh or to communicate a witty idea or concept. I was a bit more grotesque some years ago and made things to disquiet readers, but I guess I have somewhat mellowed with age. I’m influenced by B movies, punk, underground comics, and these are all reflected in what I do. I guess I try to create, within my capabilities, the kind of material I’d like to consume.

Smoking weed provides good and bad experiences, so I joke about that too. I try to entertain the reader and make them identify with the joke, and with the experience of smoking cannabis. On the other hand, some jokes that I would include in my "stoner humor" do not deal with cannabis itself, but I guess the result is the kind of comics that I would like to read when I am stoned. I am a regular smoker, and against prohibition, but my goal is just to make something that is fun to read. 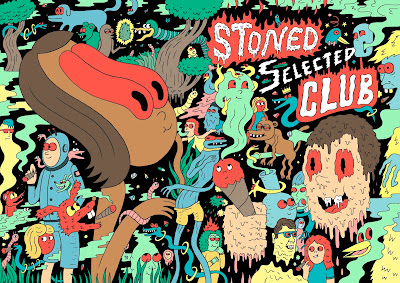 NB: What do you think of stoner culture at the current time, as legalizing weed and policies like it are becoming more mainstream?

JP: I'm not an expert on the subject. Maybe in the past it was true that artists involved in stoner culture felt motivated by their ideals. But nowadays, cannabis is becoming normalized and smoking joints is not just for “outsiders”, so I think that contemporary artists dealing with this subject are more interested in producing an aesthetic that appeals to people.
NB: There are examples of your work that also make ample use of arrows that direct the reader through mazes of collage-like works. These examples really feel like you're challenging the reader to make sense of things which don't necessarily have logical connections; sort of like a person making sense of word associations. Do you have a particular purpose behind these works? Is there always some sort of secret route you hope that the reader will eventually discover?

JP: I use “arrowed balloons” for various purposes. On the one hand, arrows help define strips or sometimes make certain concepts stand out, because in these cases there is only one possible reading direction. I also use it for convenience, I find it easier to plan a page like this instead of dividing it into strips.

On the other hand, the arrowed balloon can also be used to create an interactive comic in which the reader can vary the reading direction depending on the options they choose. In these cases, I don’t expect the reader to follow a particular route, but for many, it’s a “choose your own adventure in a doubled page format” kind of thing. The difficulty of this lies in the limited space. You can’t extend these things forever and you have to make sure you close the pathways eventually so that the reading can be coherent. To make something like this, to open and close paths so that everything fits and makes sense and is fun, but is also pretty tiring. The centerfold inArgh! #7 is an example of this type of use of arrowed balloons. 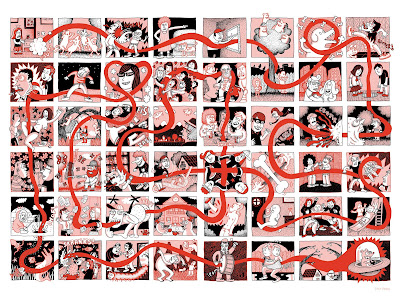 NB: Your recent cover for Babelia depicted figures from Spanish counterculture in the 1960s, '70s, and '80s. For those of us disconnected from Spanish pop culture, could you talk us through some of the associated meanings and references you featured in that montage?
JP: I was asked not to draw anyone in particular, but in any case I made reference to Ibiza’s hippie movement, flamenco artists Camarón de la Isla and Paco de Lucía, Eloy de la Iglesia’s neo-realist delinquency cinema, as well as Madrid’s music scene and the likes of Parálisis Permanente, and gay comics pioneer Nazario.
NB: How did you get into animating, and how do you approach your work in that medium? How does it differ from your comics?
JP: I did my first animations with a program called Deluxe Paint Animation when I was 15 years old. I didn’t keep them, but they were basically short “gore gags” only a few seconds long. In my twenties I picked it up again when I discovered Flash and since then I have used it as another way to express myself. Depending on the idea, I can turn it into a comic or an animation, but the latter is usually for something that doesn’t need voices. 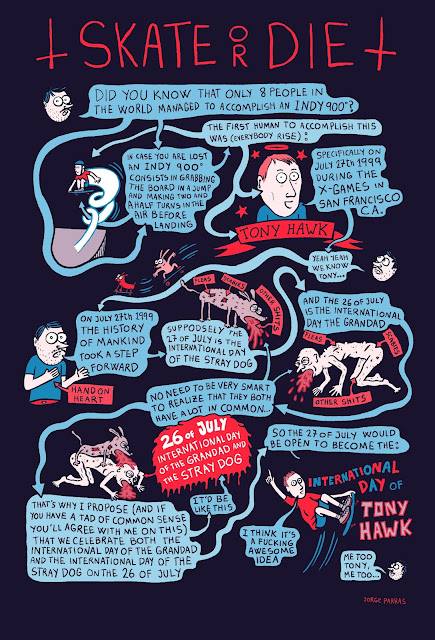 NB: The "loop comics" on your site merge GIFs with comics and animation. How much of an influence has digital culture had on your work? Why did you decide to call them "loop comics" rather than animations?
JP: I guess I’m quite influenced by Rather Good’s first animations and other interactive content pages made with Flash, like Hooger Brugge and Total Jerkface . I called mine “Loop Comics” because they’re read like a comic, you follow the page, but the individual strips are repeated on loop.

NB: You've also developed mini flash games for your site. In your mind, is there a common thread between your comics, loop comics, and interactive stuff?

JP: Depending on its purpose, I make comics, games, or animations. I usually try less common techniques, especially in games, like pixelation or collage. Ideas also vary depending on the medium they are realised in. In any case, I identify with everything I do and I consider everything suitable for my work.I use several different graphic or narrative registers depending on the medium I use or my intentions, using so many different techniques is characteristic of my work. 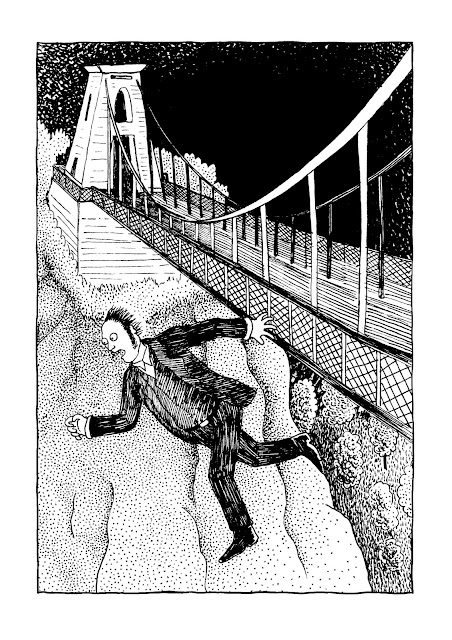 NB: What projects are you working on right now?