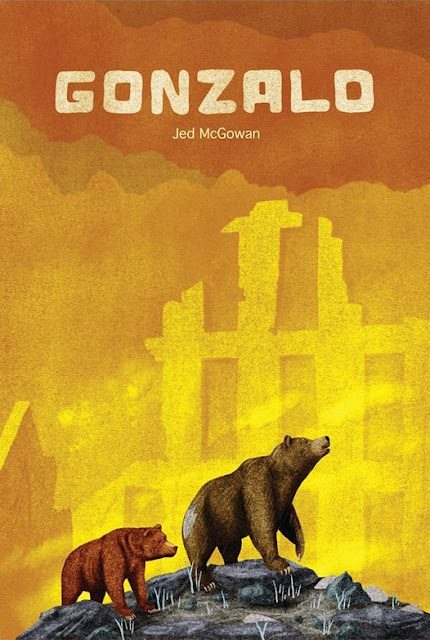 Set against the hellish post-apocalyptic backdrop of a decimated future California, Jed McGowan’s Shortbox comic Gonzalo follows an aging robotic bear who has been “several decades in the field” and her young flesh-and-blood cub, now nearly grown. The robot has been tasked with caring for the young animal by humans who are likely long dead: their conservationism aimed at protecting a single bear seems in retrospect a humorously small and pitiful effort foregrounded by the surrounding environmental collapse – burned forests due to drought, cities gone dark. McGowan’s grainy color palette gives the impression of air that is never completely clear of smoke, and the California drought is the implied result of human-instigated climate change. The pair of grizzlies make their way across a fraught and hostile landscape with no particular destination or goal in mind other than immediate survival. Behind this more personal story, however, is McGowan’s exploration of the human tendency to take destructive advantage of that which nurtures and sustains us, and the way in which this plays into the relationship between mothers and their children. McGowan skillfully sets up a story that interrogates how human nature has fueled the decidedly unnatural phenomenon of climate change, and how the dissolutive sacrifices of the story’s central matriarch mirror the decline of the earth itself.

Primarily through modeling behavior, the narrator, whom will hereafter be referred to as “RB” or “Robot Bear”, takes on the role of Gonzalo’s mother, utilizing the information stored in her secondary computer to show Gonzalo how to be a grizzly. And make no mistake, Gonzalo is first and foremost a book about motherhood and its sacrifices, though there is a certain irony in Gonzalo being instructed in “real” bearhood by an ersatz bear. RB may look like an animal, but her narrative voice is often very human. 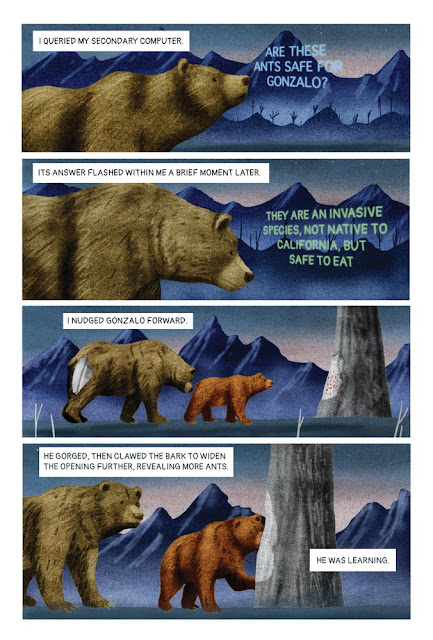 Despite, or perhaps because of, her human-made consciousness, RB guides Gonzalo with genuine love and devotion. Like any parent, she constantly questions her choices: has she allowed Gonzalo to stay with her for too long, stymieing his independence?  Has he become too reliant on her guidance to find food and water or to avoid danger? Also, like any parent, RB increasingly finds the information in her secondary computer to be antiquated or obsolete. Built by humans who lived in a world that no longer resembles the one laid out before her, the secondary computer cannot offer foolproof data. As they search for water, she follows her internal map to a stream that has dried out.

A profoundly changed topography has rendered the data she has for navigating the world outdated and sometimes useless. To be a bear in this world means something new and different than it once did, as to be an adult changes with each subsequent human generation. Humans, once invested deeply in Gonzalo’s survival - by evidence of RB’s existence - are now a threat to his life, concerned only with their own. “Our human predators hunted us most often during the day,” RB laments. As she observes when they avoid highways: “cars had become rare, but humans still stuck to paved roads…familiar pathways.” But the “familiar pathways” in RB’s secondary computer are not always reliably familiar - she and Gonzalo must forge new pathways to find the evasive resources Gonzalo requires to survive. 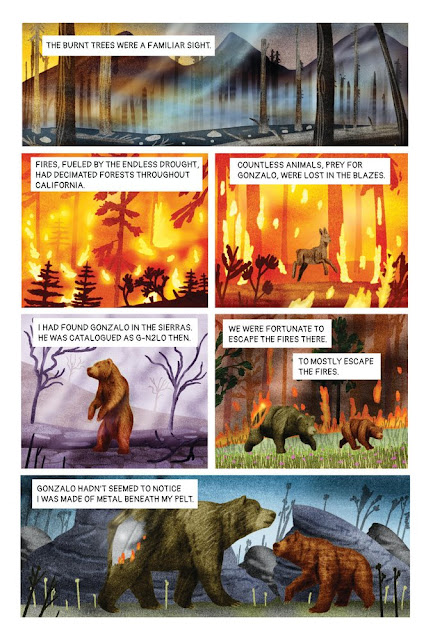 Even so, RB keeps a sharp eye out for opportunities to both nourish Gonzalo and show him what to do when she’s gone so that he can take care of himself. The pair come upon a pack of coyotes feeding on a fresh kill. To take their prey, RB roars, attempting to teach Gonzalo that intimidation can sometimes be enough to overcome an adversary.

However, these coyotes are desperate, and one attacks RB. RB feels “remorse” for killing the coyotes because as there is metal and not flesh beneath her pelt, she has an advantage over them which is “not fair”. This is an interesting parallel to the technological advantages humans often have over animals that enable them to overhunt, overfish, and over strip land, but also to cause the devastating climate change that has wracked the landscape and ultimately made it unfit to support life. RB’s single-minded focus on caring for Gonzalo echoes a human self-interest that puts itself and its children first, no matter the consequences. 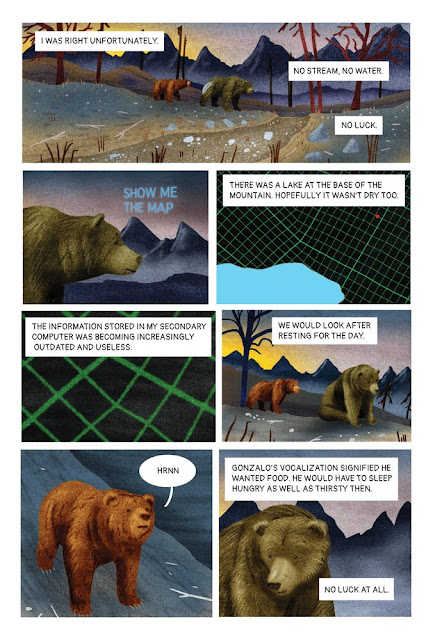 RB and Gonzalo are both facing up to their own mortality. RB, though a robot, is soon likely to experience critical system failure as she has been without maintenance for many years. And in all their searches, they have not found a mate for Gonzalo, who RB muses may be “the last grizzly in California”.

RB’s consciousness considers more than terrestrial matters. She also contemplates her own existence, turning her eyes to the stars, now brightly visible and unobscured by city light pollution. She narrates the familiar mythological story of Arcas and Callisto. Callisto, a nymph, carries on an affair with Jupiter, king of the Gods, and bears a son, Arcas. Jupiter’s wife Juno, angered, transforms Callisto into a bear. Coming upon his mother while hunting in the forest, Arcas is about to kill her, but Jupiter quickly transforms him into a bear as well. The mother and son are immortalized in the sky, as the constellations Ursa Major and Minor. RB sees herself in Callisto, who was “both a bear and human,” meanwhile “I was a bear with a mind programmed to be like a human’s…but God hadn’t made me this way. The researchers had.”

Like Callisto, RB is willing to make the ultimate sacrifice to protect Gonzalo, confirming for the reader her deep maternal attachment to Gonzalo which goes beyond her programmed, prescribed role in assisting grizzly conservation. When RB and Gonzalo become separated after fighting the coyotes, she encounters two humans – and father and son – and two competing directives: protect Gonzalo, but do not approach humans. RB doesn’t hesitate to proceed towards the hostile human pair. She remarks that they are “no longer predators”  - no longer at the top of the food chain – and that the tables have turned, and “They had the startled look of prey about to be eaten.” Wrenchingly, RB must use the same roar she used to try and intimidate the coyotes earlier in the story to scare Gonzalo away from her and thus save him; “I had done all I could for Gonzalo. I had done too much.” She violates another directive, biting down hard on a human’s leg so he cannot pursue Gonzalo. The admission that she has “done too much” suggests that RB’s having remained with Gonzalo for longer than a natural grizzly mother would is due to a selfish, human impulse to remain with her son for as long as possible. Her scientific attachment to him has irrefutably transformed into human maternal love, and she has been loathe to leave him.

Unaware that RB is made of metal and thus cannot provide meat, the human pair crow that they will “eat for a week” after killing her. Like the selfless Giving Tree (perhaps referenced by the spectral tree on the comic’s back cover), RB hopes that the humans will nonetheless take her pelt for warmth as she fades into darkness. Her last thoughts are of Gonzalo. 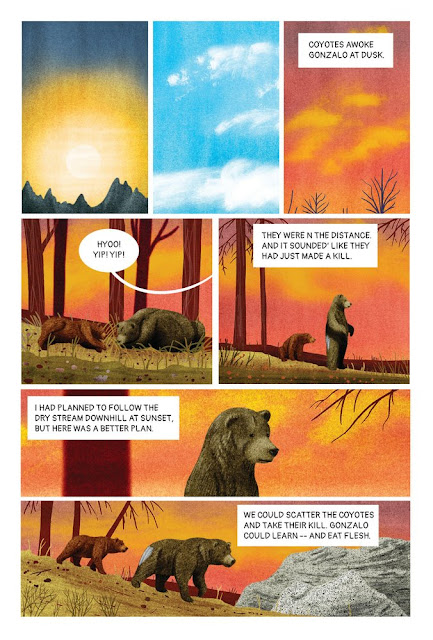 As a book about the sacrifices of motherhood, Gonzalo also cautions against taking mothers for granted, against believing that they will always be there to nurture and protect us. In doing so, it is also about how we have taken “Mother Earth” for granted, believing that she will always provide for us no matter what iniquities she suffers from human hands. If we shortsightedly depredate the earth to enjoy ease and convenience in the here and now, there will be little left later to sustain our children and grandchildren, or anything else living. However, Gonzalo’s opening lines offer a message of hope, as they describe RB breaking open a burnt tree to reveal ants for Gonzalo to eat: “There was life,” she thinks “within this dead tree.” This hope, that life will out, is couched in RB’s forward-looking, parental love for her young charge, which, in her sacrifice, rejects trading young people’s futures for the ephemeral comfort of their elders.