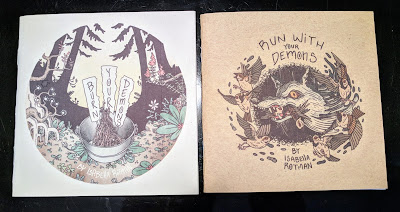 “Do you ever get tired of contributing to other people’s character development?”

So begins Isabella Rotman’s haunting, personal 2015 comic Burn Your Demons, a rumination on feelings of inadequacy and trying to confront the damage it breeds. Instead of merely documenting the wallowing that a subject such as this often begets, Rotman conveys the emotionally debilitating density self-criticism engenders through rhythmic choices, playing with negative space, and panel positioning. She then encases the comic in a fold-over cover sealed with wax, as if it is a papal decree or the most cherished of diaries.

Cracking the seal takes you quickly into Rotman’s reflections. Her choice of a circular layout for each page gives you the sense that you're peering into the inner workings of Rotman’s secret spaces -- the moments where she lets down her guard, admits her vulnerability and her desire to connect on her own terms. This orbicular choice also allows Rotman to use the space around her thickly inked cartooning to both confine and expand that upon which she is focusing each beat as it unfolds. The effect of simultaneously experiencing the voyeuristic nature of the narrowed focus of the layout combined with the expansiveness of Rotman’s art and subject places the reader in a liminal space between the other and the self, allowing for an almost dissociative look at Rotman as if she were me ... or she were you.

There’s power in this -- the acknowledgement of the other as the self. It breeds empathy. It breeds understanding. It reassures. It connects. 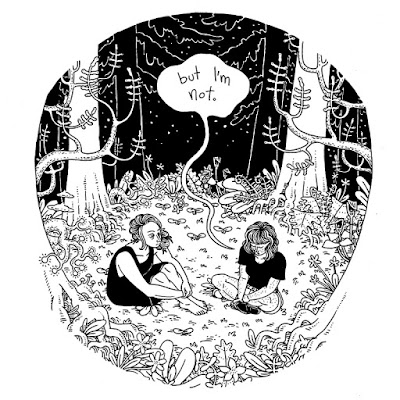 Rotman continues both the medium and the message in her 2016 follow-up book. Run With Your Demons extends Rotman’s introspection -- the working through things --- the cacophony of self-admonition and doubt. Here the peephole motif of Rotman’s circular layout makes her doubts and uncertainties all that more focused. As her own brain manifests itself both in the incessant chirping of birds and the barking of dogs, we peer in and watch as she struggles and desires against them.

Run With Your Demons clearly demonstrates Rotman’s growth as an artist. Here, her grappling with herself begins to transcend the page -- the dissonance is visceral, the dreamed-of resolution at the end seems real, seems possible. There is a greater profundity to the hope expressed in Run With Your Demons than the almost (sadly) reflexive acceptance found in Burn Your Demons. If a work of art is that which causes the audience to pause and reflect, then from their construction to their content, both of these books are art pieces. Rotman is an artist and her creations pay service to their larger functions.

You can pick up both Burn Your Demons and Run With Your Demons from Isabella Rotman’s online store HERE.