Quick Reviews of books by Theo Ellsworth and Luke Howard

AN EXORCISM
By Theo Ellsworth
Published by Kus!
Available HERE 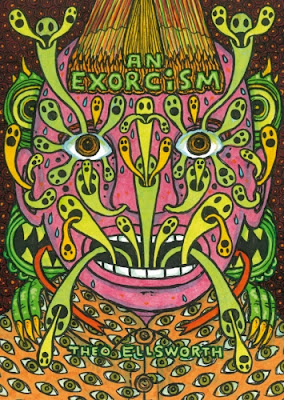 Like so many of Theo Ellsworth’s comics, his new release from Latvian publishing house, Kus, is about exploring the self and the potential healing power of that process. An Exorcism consists of “mind projections -- hand traced onto 210 paper slides, 180 half size - 30 full size arranged onto 120 pages” documenting, wordlessly, the step-by-step process of Ellsworth’s complete self-exorcism. When Ellsworth goes deep inside to purge his demons, you know it’s going to be a journey. Intricate linework and raffish coloring are again, as to be expected in an Ellsworth comic, pushed to the forefront as his particular style demands. There is a sequential juggernaut to the narrative of An Exorcism, as everything unfolds, blossoming from one panel to the next, taking the reader further down the rabbit hole of Ellsworth’s imagination into undulating patterns of our own self-doubts and the evils that posses us. If you’ve never read a Theo Ellsworth comic before, this is the perfect opportunity to correct that imbalance in your life. Exorcise those demons and enjoy the ride. 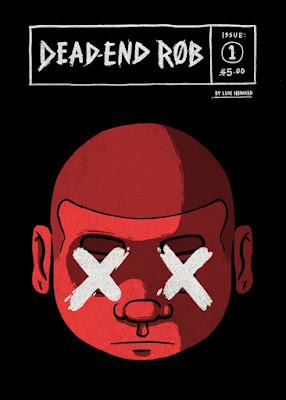 Can you imagine your life being “so dull and devoid of meaning” that, before you even die, your own soul comes back from the dead to haunt your friends and family? This is the premise of Luke Howard’s Dead-End Rob, the story of Robert and his sister Ambria and her friend Trip (oh, and additionally, Robert’s soul returned from the dead before Rob dies). Straddling somewhere between a slice-of-life comic and something much more dark and sinister, Howard’s comic reads quickly and his visuals bounce along with his tone, featuring rounded faces and detailed backgrounds that drop thickly when Howard starts drawing Death and its realm. There seems to be an underlying theme of dealing with regret deep in this book, but it is still in process, still revealing itself. It’s hard to predict where this series will eventually go, but the first two issues are setting up something that could end up anywhere. I’m in. Let’s go.