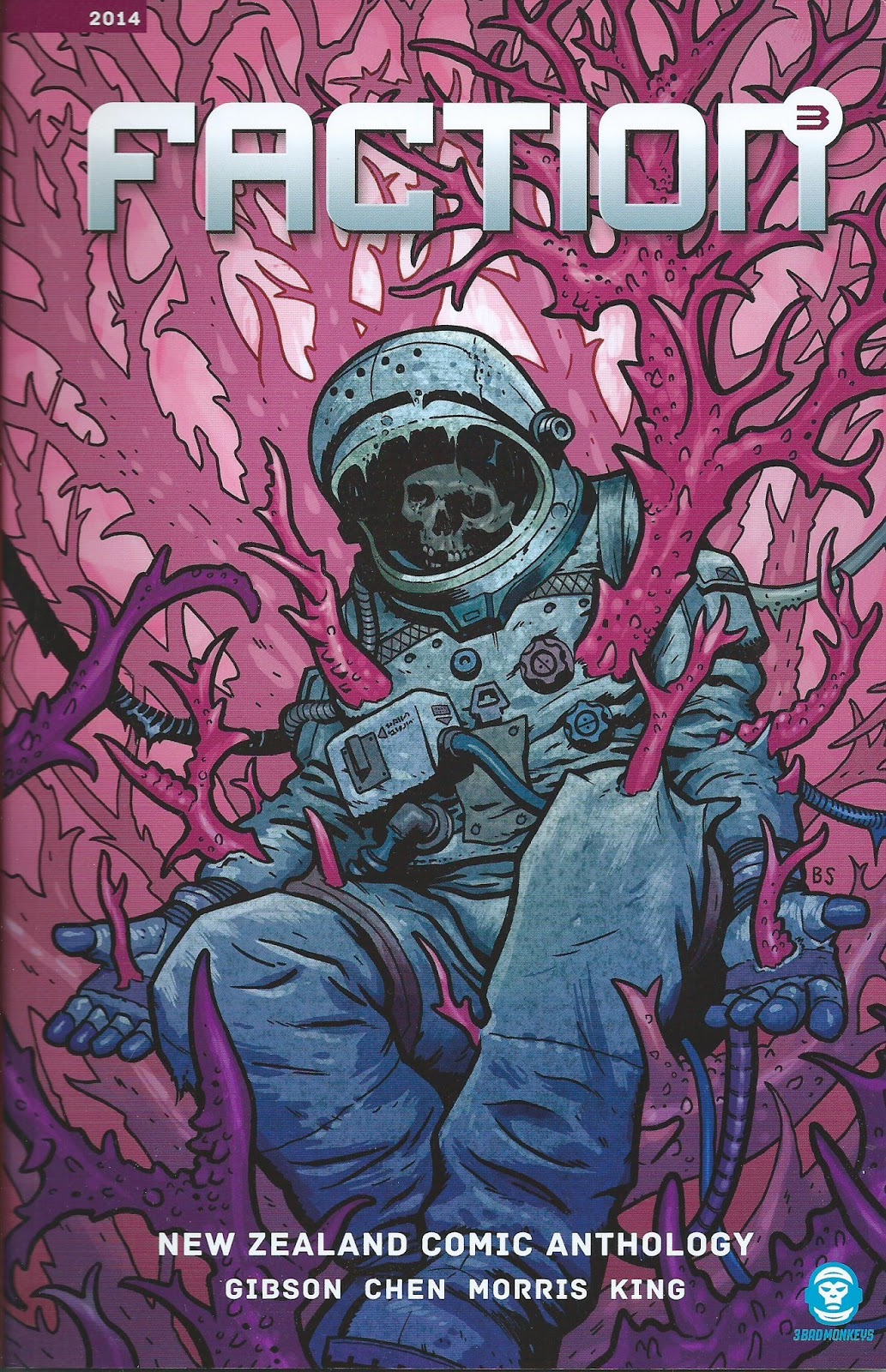 Some addictions can be glorious things. It's been nearly six months since last I had my Kiwi comics fix (http://www.comicsbulletin.com/reviews/6399/tiny-pages-made-of-ashes-122713-his-back-pages/) and I've been jonesing hard. Thankfully, editors Damon Keen and Amie Maxwell are back with their amazing New Zealand Comic Anthology, Faction, and issue three continues to “show off the diverse range of comic talent that exists in New Zealand and celebrate the extraordinary new direction that comics have been taking in the past years.”
The heft of issue three is provided by Tim Gibson's 27 page “The Reservoir”. I'd first been introduced to this piece when it ran in its digital incarnation, but for inclusion in Faction, Gibson has retooled the story, format, and (obviously) presentation to make it altogether something new. The addition of color pulled from a palette of beiges and gray-blues adds another texture to the emotional intensity with which this story is infused. Here, outside its original kinetic presentation and onto the static page, the pacing is different, more intense, thick with the moral relativity of its tale.

Also of note in Faction 3 is Katie O'Neill's “Don't Let Go”, a post-apocalyptic short about love, humanity, conflict, devotion, and acceptance. In this, O'Neill uses time shifts to add tension and resonance. In eight sparsely worded pages, O'Neill is able to make powerful commentary on the cost of war and the divisiveness of “the other”, while creating a deeply affecting story of faithfulness and kindness. It's potent in its brevity, expansive by being controlled.

Jonathan King continues to demonstrate his genius as a cartoonist with his piece “The Night Limited”, a surrealistic travelogue full of questions about place, identity, sexuality, and voyaging. King's Hergé -like cartooning adds a cushion to the tumbling his esoteric story creates in your head as you follow its journey. Fecund with metaphor, this six page train trip from the land of Night to the land of Day forces the reader to travel slowly, soaking in all that King is doing in both his art and his story-telling. There is much to discover along the way.

Faction 3 ends with “Crush the Skull of the Heathen Graeme” by Toby Morris. I loved this four page character study about two blokes from, ostensibly, the Middle-Ages who have been tasked by their leader to, as the title suggests, crush the skull of the heathen Graeme. Although the job they have been assigned is gruesome, the two banter as if they were office workers, imposed upon by an additional assignment that interferes with their regular duties, their plans. The juxtaposition between the nature of their business and their conversation about it would be hysterical if it didn't point to existential questions and Kafkaesque absurdity.

Once again, Damon Keen and Amie Maxwell have curated some of the best comics currently coming from Kiwi creators. Faction 3 is a delight in its diversity and is a celebration of the medium itself.
You can pick up a copy of Faction 3 here.