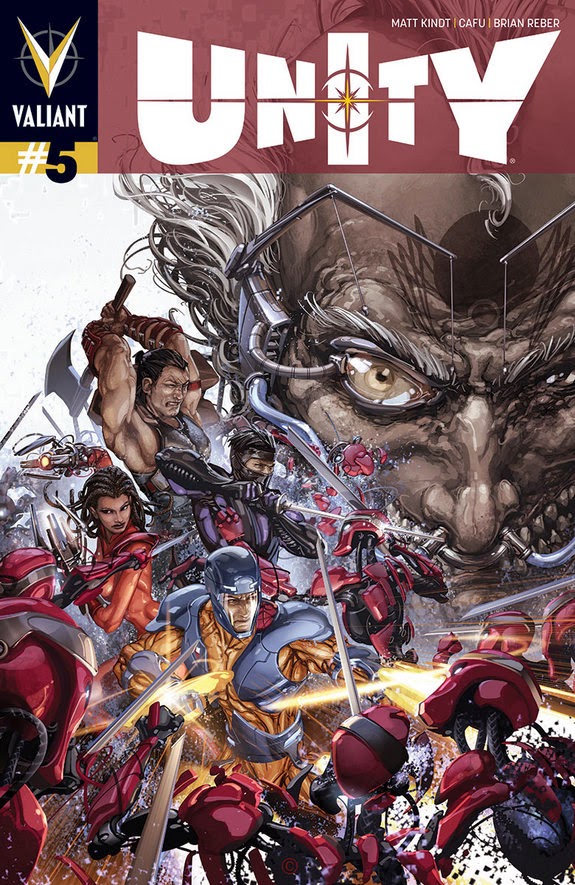 “I need you to get the …. Team together.”
And we're off – Unity is Valiant's team book and writer Matt Kindt seems to be using issue five as a meditation on the team genre itself. Sure, we've got a narrative at work here, and I'll get to that in a moment, but where this book stomps hardest is within the realm of relationships and the concept of … well ... unity. Kindt understands that most human connections are based on selfish motivations – the idea of “what can this person bring to my life that otherwise I couldn't gain on my own” – and the unabashed embrace of this fundamentally self-serving reality leads to a clearer understanding of the parameters of interactions than cloy and vague abstractions such as “friendship” or “love” or “family”. When we are assured of the role we play in the synergy with others, a clarity ensues and, perhaps, a greater trust is formed.
At least you understand where everyone is coming from.

This is what a writer like Matt Kindt can bring to the Super Team concept, and yet in execution it is neither ponderous diatribe nor sonorous lecture. Kindt wraps this rumination in an action book and lets an artist like CAFU set the pace of the narrative thrust. CAFU's pencils have the ability to add kineticism to profoundly static moments, his choices help even a seated expository conversation crackle – it's an interesting trick and one that I certainly wasn't expecting. Added to this is the color work of Brian Reber, who has an impressive array of gray tones available which he uses to accentuate nuance and allow his brighter palette to pop. Letterer Dave Sharpe gets into the action too, not only is Ninjak's head's up display particularly … ummm … heads up, but there is such a fire to Sharpe's FWOOM that when it lances off a soldier’s head you feel it in your gut as if you were sitting on one of those big bass speakers the kid's have in their cars – you know, the ones that rattle your windows and set your teeth on edge.

Like I said, though – this virtuosity is in service of story, not in opposition to it. Here is an ALL-NEW ARC! START READING HERE! You'd be hard-pressed to ignore a solicitation like this:
Coming off of the earth-shattering repercussions of their first mission, Ninjak is leading the newly formed Unity team right back into the trenches to face the Valiant Universe’s next colossal threat – the enigmatic Dr. Silk and his high-tech terror cell: WEBNET! With the fate of untold millions on the line, can this team of cutthroat heroes uncover Silk’s endgame – and his connection to Ninjak’s shadowy past?
And you'd be a fool if you did.

Kindt and crew are putting the Valiant touch on the team-book with Unity #5. That means you've got a solid group of artists with a certain degree of freedom to explore their craft, as well as the knowledge that the company who is writing their checks has a certain level of trust that this is the formula for making great comics.
I, for one, couldn't agree more.