OFF THE CHARTS: THE SONG-POEM STORY - A Documentary about Music from "another planet"

Today I found Off the Charts: The Song-Poem Story released February 11, 2003 and directed by Jamie Meltzer. 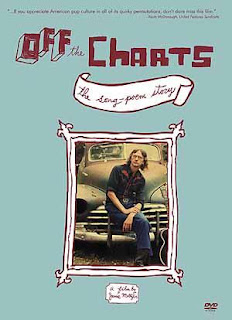 “This music has everything in the world going against it. It’s completely artificial, it’s a scam … I could probably list 15 different reasons why it shouldn’t work. But, for some reason, something comes through all this stuff. There’s about 10 to 20 percent of it that is from another planet somehow.” – Ellery Eskelin

This fantastic documentary is an homage to the Song-Poem industry and the people involved. Part history of the industry, part character exploration, the movie focuses on a number of songwriters and some of the individuals who make the music. Like all great documentaries, the film has a hands-off attitude towards its subjects, letting all their idiosyncrasies shine, and lets the audience make its own judgements. The movie is funny, reverential, engaging, and brilliant. It truly documents its subject matter.

Since 1900, aspiring songwriters all over the world have responded to ads in the backs of magazines, comic books, and newspapers that suggest fame, fortune and artistic immortality in the music industry may be right around the corner. All they have to do is send in their poems or lyrics for evaluation, and if the company likes what has been submitted, they will turn it into a song, record it, and send it back to the songwriter for distribution. The company likes every song it receives, though, particularly when its author is the one paying for the recording. Because of this, what you end up with are songs like “I’m a Ginseng Digger,” “Jimmy Carter Says Yes!,” “Richard Nixon,” and “Chicken Insurrection.”
As Jamie Meltzer says of his film, “"The beauty of song-poems is that they are a result of the intersection, or collision, of ordinary people's expressions and the desires of musicians/businesses to make a quick buck, making the music as fast as they can, usually in one take. When those two forces combine, they create strangely compelling songs that are unlike anything you've ever heard."

The film is filled with memorable characters. Two that stand out the most are Caglar Juan Singletary and Art Kaufman. Caglar is a songwriter from Elmira, NY who has written songs titled "Annie Oakley," “Bruce Lee's Daughter," and my favorite, "Non-Violent Taekwondo Troopers".


I really can’t tell if Caglar is insane, mentally handicapped, or an extra-terrestrial genius of epic proportions. There is something incredibly engaging about him, and yet utterly creepy at the same time. He’s the man, after all, who wrote in his song about Annie Oakley that she is one of his “historical honeys” because she was “rifle nice.”

Art Kaufman, on the other hand, is one of the song producers, or “song sharks” featured in the movie. His company, Magic Keys, has recorded thousands of these songs, including Caglar’s. Kaufman, too, is a really engaging character and the film allows him to be that. One of the best moments in the film is when it shows Kaufman’s process, turning “The Thing” by Nilson V. Ortiz from a poem into a song in less than an hour.

Off the Charts is filled with moments like this. My only complaint about the film is that it spends too much time on Song-Poet Gary Forney who doesn’t warrant the exposure and is really not a very likable sort. When the film follows Gary on this “Iowa Mountain Tour” with his son, it just goes on far too long and I felt myself cringing as it continued. I assume Meltzer wanted to use Forney to show how these people are dedicated and honest about their music, but in Forney’s case it is so delusional and pathetic that it is hard to feel sympathy towards him.

Still, this is a fantastic documentary with a clear narrative, a purity of intent, and a real love for its subject matter. I can’t recommend it enough.

You know, I’ve got all those poems I’ve written to my wife over the years for Valentine’s Day, our wedding anniversaries, her birthdays, and when I fucked up badly and had to woo her back. I bet one of those would make a really good song…. Hmmmm. What’s that address for Magic Keys again?