The Parking Lot Movie -- It's About More Than Parking 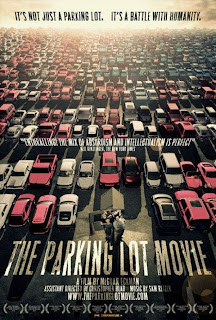 In the parking lot we were dynamos. Whirlwinds. We were rulers. We had complete autonomy. We had it all in a world that had nothing to offer us.

This documentary is the perfect example of the possibilities of the medium. The film focuses on a little parking lot in Charlottesville, Virginia, specifically on the employees of the parking lot as they try to make sense of their existence, their profession, and the universe itself. By allowing these parking lot attendants to just talk about themselves and the lot, the film touches on themes of inertia, existentialism, socio-economic politics, and even the nature of art.

The film had a showing at the South by Southwest festival last year where it apparently was well received. The movie also ran on PBS as part of its “Independent Lens” programming. As I mentioned before, it is currently available on Netflix Streaming.

The narrative of “The Parking Lot Movie” relies almost exclusively on interviews conducted with present and former lot attendants. This self-described “ragtag group of fractured poets” wage a daily war against boredom, isolation, drunken college students, and the self-inflated egos of car owners who feel that parking their expensive machines is a right and not a privilege. Scott Meiggs, one of the attenants who worked in the lot from 1996 to 2000, gives a great summary of the sensibilities of the group of attendants working in the lot. He says, “We were all capable of some things but we didn't achieve it because we were too arrogant.”

Having worked in the service industry for years in my younger days, I completely understand this attitude. In cities all over this country, local bars, restaurants, coffee shops, book stores, and even parking lots are way stations for overeducated individuals who are having a hard time fitting into the “system”, are overwhelmed with the responsibilities of the American Dream of success, and feel that they are entitled to the rewards of self-expression but have no idea what to say. So these individuals take these service jobs which give them a vantage point to confirm their disgust with everyone else. The tagline to “The Parking Lot Movie” is, according to their press release, “It’s not just a parking lot, it’s a battle with humanity.” 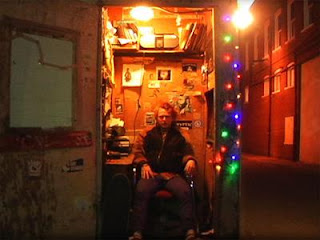 While the movie could easily have descended into keeping its focus on this sort of hipster rant, what redeems it, ultimately, is the fact that many of the interviews are with attendants who have left the lot and are now able to reflect upon who they were at the time, the attitudes they expressed then, and the wisdom they have garnered since their departure. In a way, this is almost a coming of age story, because while these young men still carry much of their misanthropic disgust with the entitlement so many Americans seem to have, they seemingly all have come to the realization that wallowing in that disgust is ultimately destructive to the self. As Gray Morris, and attendant from 1991-2002, says in the movie, “That’s what that job does to you. It makes you think that the fucking gate being broken is important – that it’s worth getting into a fight – that it’s worth getting into an altercation because someone broke a piece of plywood.”

“The Parking Lot Movie” will resonate with anyone who has ever worked in the service industry. Fans of the non-documentary movies “Clerks” and “Slacker” will enjoy it as it speaks to the same themes. It moves along fast, has some seriously funny moments, and does a great job of really providing a sense of place. There is a lot attendant rap video at the end of the film, which the director included because she wanted to end the film with “more pizzazz”. In my opinion, it could have been left out.